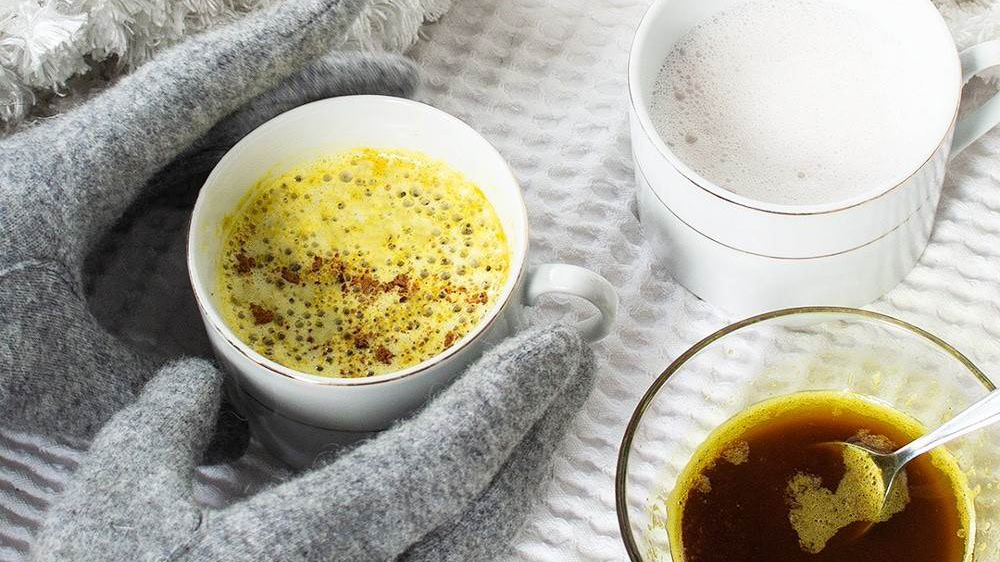 If you’ve been anywhere near the world of health and fitness lately, you’ve undoubtedly heard the buzzword curcumin, and probably seen turmeric latte on the drinks menu of your local espresso hangout.
Today we’ve got a very easy recipe for you, which will get you just as addicted as everyone else, but without the hassle of having to mix up a complicated drink every time a craving hits. But first, what is curcumin? Why is it so popular?

Curcumin is the active compound in the curry spice turmeric and the health benefits of it have been reported in over 1000 published papers. A group of curcumin derivatives known as curcuminoids can do amazing things like improve your internal antioxidant defences.

Unfortunately, curcumin in turmeric has notoriously low bioavailability, however this can be improved by consuming it with fat, and by the addition of black pepper. Peperine from black pepper can increase bioavailability by 2000%, hence why you’ll be adding coconut oil and pepper to your drink. And now, on with the recipe!

This recipe is for a paste which can be stored in the fridge for ease of use. The amounts stated make approximately four warming, spicy drinks, depending on how strong you like it. And no, it won’t taste like curry! Add the following to a saucepan:

On a very low heat warm the ingredients and allow everything to infuse for about 10 minutes. It should not boil. Pour the mix into a jar or cup and store in the fridge, stirring now and then as it cools to ensure it doesn’t separate. You can also use the mix straight away following the general idea of the method below. When the time comes to make a turmeric latte, dig 2 tsp of mix out of the jar (allowing it to sit in a warmer place for a while can facilitate this, otherwise it’s not too difficult, but it will be solid!). You can add more later if it’s not strong enough, but 2 tsp seemed about right in our test kitchen.

From this point you can either microwave or froth a cup of milk (almond milk works nicely) and stir your paste into it, or just make it as you would a cup of tea – with hot water and milk. It may require further sweetening if you are a sugar bug. The recipe also works for iced turmeric lattes, simply melt the paste in a little hot water, stir in the milk and add some ice cubes.
This really is one of those things that feels like a treat and a tonic at the same time. The perfect way to spice up your afternoon.